Highfield Prep School boys and girls welcomed the Mayor of Harrogate to their Morning Assembly to talk about his role and being an ambassador for the Borough. 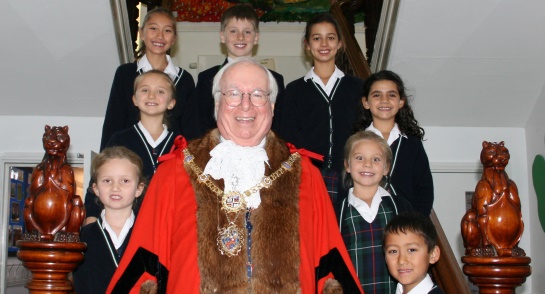 The Mayor was invited to Highfield to supplement the pupils’ understanding of democracy and British Values that they’re currently studying in class, in addition to a planned visit to the Council Chamber in the next few months.

Following the whole school assembly, where children also learnt why the Mace is carried and what the Mayor’s ceremonial dress, gold chain and badge symbolise, the Mayor met with the School Council to take part in a question and answer session. Challenging questions posed to the Mayor included,

“Why did you want to be Mayor?”, “How is Harrogate going to improve over the next few years?” and “What is the best part of the job?”

The Mayor also enjoyed finding out about the different projects and ideas that are discussed at Highfield School Council meetings.

“We regularly invite guest speakers to our whole school assemblies to talk about a wide range of subjects that coincide with the curriculum. It’s a really interesting way of broadening the children’s understanding of topics they are learning about in school.

“We were delighted that the Mayor of Harrogate was able to make time in his very busy schedule to visit us.”