‘We are such stuff as dreams are made on’ was the theme of Highfield Prep School’s recent school production at the Harrogate Theatre.

Roald Dahl’s much loved story, ‘The BFG’ was brought to life on stage by pupils in Year 5 and William Shakespeare’s magical comedy, ‘A Midsummer Night’s Dream’ was performed by budding thespians in Year 6. 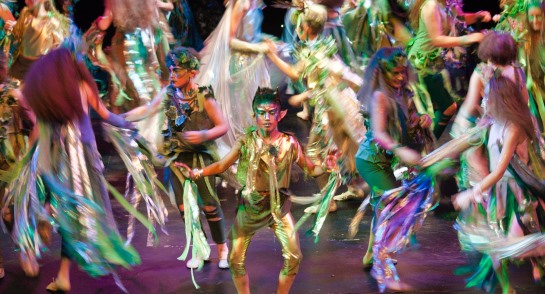 A packed audience of parents and grandparents watched the two performances in the evening. Pupils and staff from Highfield, Harrogate Ladies’ College and four local primary schools also attended a matinee performance.

“It was a dream come true for our boys and girls to perform on stage in a professional theatre.

“All children from Reception classes onwards have timetabled weekly Speech and Drama lessons which develop their communication skills and confidence. An understanding of themselves and others enables them to perform with self-assurance by year 5 and 6.

“The children should be enormously proud of their performances. They worked incredibly hard and their energy, enthusiasm and commitment was an inspiration to our younger pupils.

“The production was a culmination of a year’s work by every member of Highfield’s teaching staff and parents who came together as a community to create the fantastic sets, props, costumes and makeup.“